The Gartner Hype Cycle as an Investment Tool

An essential element of the Investment Frame is deciding what sort of stories you want to focus on.  This post examines a tool that is useful for understanding the stories around early stage growth companies.

The Gartner Hype Cycle is one of a number of marketing products published each year by the research firm of the same name.  It provides “a graphic representation of the maturity and adoption of technologies and applications.”    The 2017 version is as follows:

The Gartner process focusses on technologies, however, the same processes apply to shares. We can compare the five stages of the technology hype cycle with similar stages of a company’s share price. 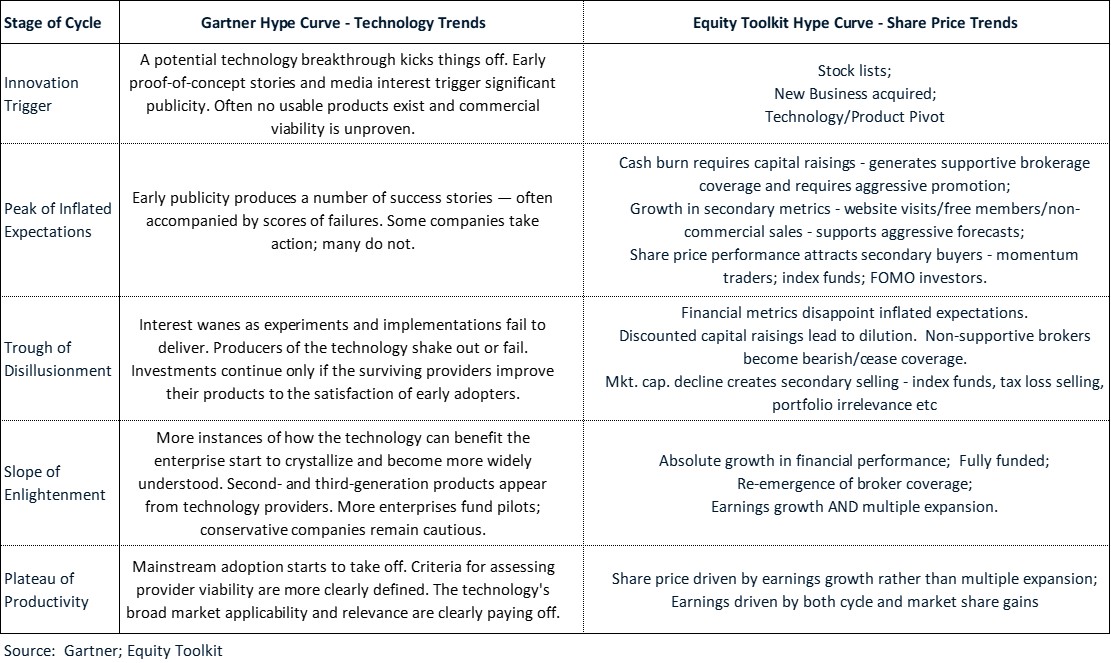 Perhaps the most famous example of the Hype Cycle in action (for both technology and share prices) was the dotcom bubble.  Software company Technology One (TNE.ASX) is one example of many from this period.  A more contemporary example is cloud accounting software provider Xero (XRO.ASX). 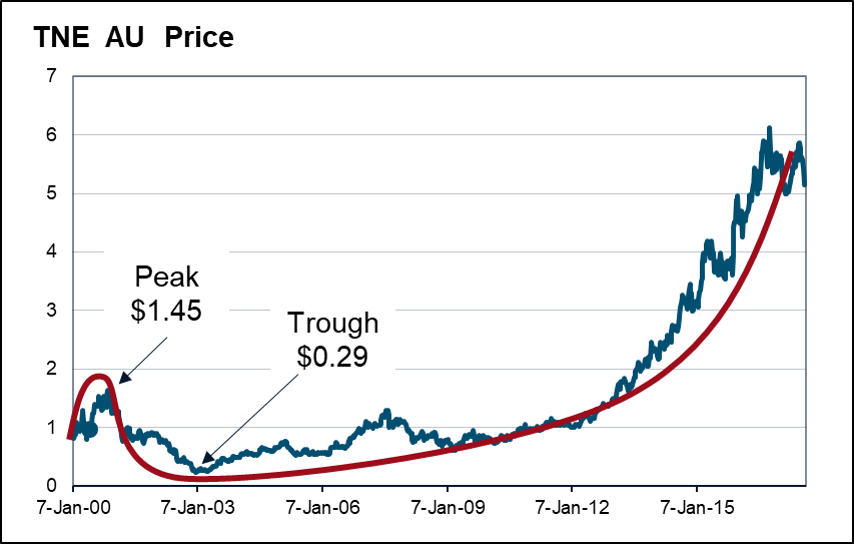 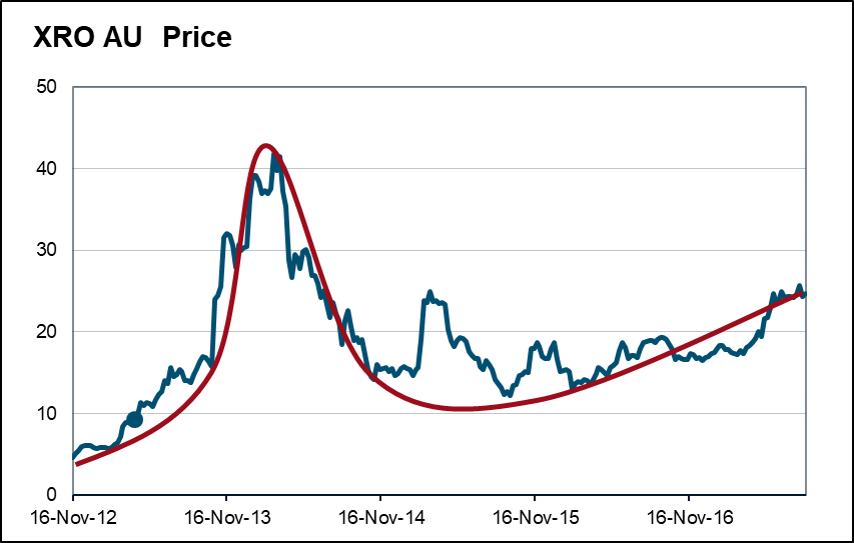 Obviously the Hype Cycle is a tool not a prescriptive process.  Not all technologies or share prices will be hyped.  Not all will suffer disillusionment.  Perhaps most importantly of all, many will never see the slope of enlightenment, let alone the plateau of productivity.  Nevertheless there are a number of ways we can apply the tool.

The first is the rather narrow option of using it in the manner that Gartner publish it – to understand the technology cycle.  This would certainly be a useful element of Industry Analysis under the Operational Frame.  However,  for most non VC investors the specific technologies discussed may not align that well with the investment opportunities at the time.

A second use of the Hype Cycle is as a momentum trading tool to understand the types of stories the market is telling about a share price.  Is the market in hype phase?  If yes, then ride the momentum.  Is it in despair phase?  If yes, short the momentum, buy the dip.  Good traders will find ways of incorporating this story telling into other momentum trading signals.

There is an obvious problem with this approach.  Whilst we know the stylised shape of the cycle and can fit this to share prices after the event, how do we do so beforehand.  The fractal nature of share prices means the shape of the cycle can be replicated on many different scales.  What appears a peak on one scale, is just a blip on another.  What appears a trough is just a pause on the way to an even lower share price.

Consider the current shareprice of Updater (UPD.ASX).   With a market cap approaching A$700m and minimal revenue, it would be easy to stick this share price right at the peak of inflated expectations.  But look closely and a similar decision could have been made at 60c, thus selling out way too early in trading terms.  How are we to know whether there is another 100% upside before the hype peaks?  How are we to know whether there will be despair at some point to give us a better opportunity? 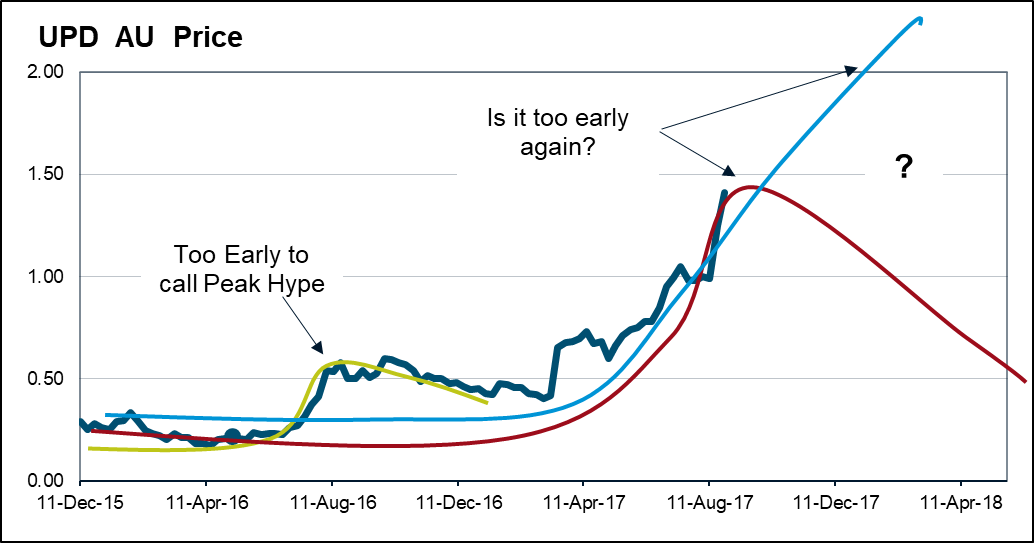 This leads to the third way the Hype Cycle can be applied, which is as an adjunct to a fundamental investment framework.  Traditionally such frameworks are focussed on buying cheap and holding for a long time.  If we follow these rules then things should take care of themselves without too much need to focus on market timing.

The Hype Cycle model provides a number of ways we can fine tune this approach when investing in high growth early stage companies.  Firstly, whilst not perfect, the model touches on some deep truths about how markets and humans work.  Fear and greed are always present in markets, but in early stage companies where information is limited, the impact of these emotions is greatly magnified in share prices.  By reminding us of these factors the model forces as to consider both the state of our knowledge and the question of timing in more detail.

Secondly, whilst not every stock suffers a trough of disillusionment, enough do that it can help us avoid FOMO syndrome – the Fear Of Missing Out on a share price that is going straight up.  If we believe that most growth stocks will suffer this trough at some point, we will be more inclinded to wait for this better opportunity.

Finally, the model makes us consider what this better opportunity might look like.  An easy trap is to say something along the lines of “I know the stock will probably suffer some disappointment, but by that stage the share price will be higher so I should still buy now.”

The conclusion is that its better to buy at point A than at point C.  However, this is not necessarily the case.  Point A might be the cheapest time to buy, but is is the best time to make the bet?

Intrinsic to most good investment processes, is a process for working out how much to commit to each bet.  As Buffet says, ‘Opportunities come infrequently. When it rains gold, put out the bucket, not the thimble’.  A corollary for most investors is that  if risk or uncertainty is high, we should be more inclined to bring the thimble.  A conservative process would dictate that we invest less absolute dollars at point A than we would be prepared to do at point C, by which time our overall knowledge of the company is much greater.

If we take this approach, then we might find that there are actually better opportunities to maximise profit by paying a higher price.  Buying two shares that double makes the same absolute amount of money as buying one share that triples.  But on a risk adjusted basis, the trade might be considered more profitable.  If the outlook for the company has improved at a faster rate than the share price,  the shares might actually be “cheaper” at the higher price.

Of course I can already hear you say –  if the news is improving, won’t this get priced in?  Not necessarily.  The essence of the Hype Cycle model is that there are times when good news gets priced in too quickly and times when it gets priced too slowly.  We should wait for this second phase where we have information that is too slow to be priced by the market.  It is the modern day equivalent of not shooting until you can see the whites of their eyes.

In summary, the model acts as both an explanation of market behaviour and a moderator of our own behaviour.  A strategy that waits until  C might miss some good opportunities at A.  But it will avoid the losses from buying at B.  By distinguishing between the emotions and the fundamentals driving the share price at C, it will help in bringing the bucket rather than the thimble to this later trade.

In the period post the dotcom bubble, point C often offered better fundamentals at similar prices relative to point A.  In other cases fundamentals were similar but prices much cheaper.    But most encouragingly, in many cases both fundamentals and  share prices were significantly better at point C than at point A.

Like all models, the Hype Cycle is not perfect.  But when applied judiciously, it should be useful.