Technology One (TNE) released their H1 19 results last week.  Company guidance for profit before tax (PBT) was a bit below market expectations and as a result the shares fell post result.  All pretty standard stuff.

There were however, two quite interesting aspects from the result:

– $50.8m based on AASB15 with pro-forma capitalized development.

In these two observations is the essence of earnings quality analysis as a tool for investors.  As Professor Sloan noted in his seminal paper:

“Stock prices act as if investors ‘fixate’ on earnings, failing to distinguish fully between the different properties of the accrual and cash flow components of earnings.”

At least as far as the TNE result goes, these words hold as true today as they did when first penned back in 1996.

What does Earnings Quality Mean?

One way to think of this is that reported earnings should come with confidence intervals.  So TNE’s FY 18 profits might be reported as $50.8m with 95% confidence that real profits were somewhere between $25m and $67m.

To use one of the indicative illustrations that TNE are themselves so fond of using, the historical profit trend might look as follows: 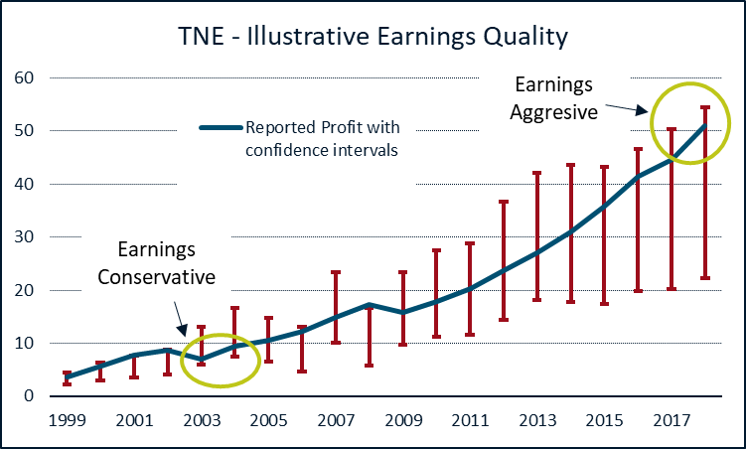 In this analysis, we could say that reported earnings are conservative when they are at the low end of the confidence interval and aggressive when at the high end.  Of course this is not an exact process and the confidence intervals themselves are going to be estimates.  We are simply trying to understand whether the reported number is more likely to be close to the top or the bottom of the potential range of numbers.

So we could in theory base our confidence intervals around the cash flow number (or some average of cash flow and earnings).

Again an indicative illustration for TNE. 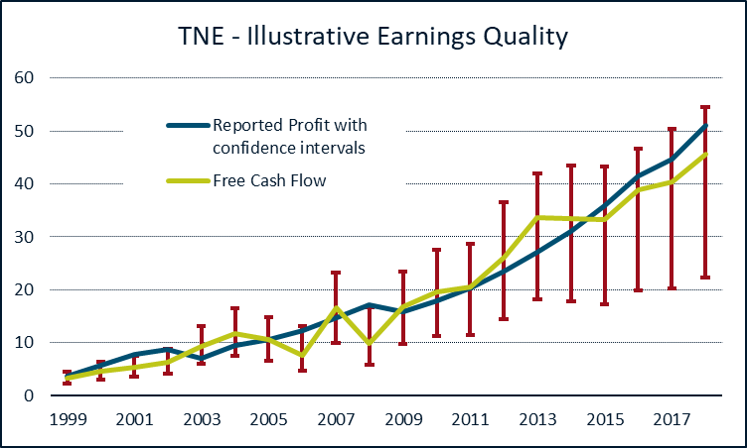 If you are interested in pursuing these ideas further, we have written about them in more detail here:

The Accruals Framework – History and Overview

The Accruals Framework – Earnings vs Accruals

Earnings quality analysis is not an exact science, but it offers two courses of action for analysts trying to understand where risk and opportunities lie.

In a positive vein, earnings quality and accruals analysis can be used to try and profit from these risks and opportunities.  There are many nuances to this approach and the above illustrations should be treated as purely that. For anyone interested in looking into the specific issues surrounding TNE I would highly recommend tracking down the excellent research by my former colleagues at Diogenes Research.

In a negative vein, the problem can be inverted.  Instead of trying to use earnings quality issues to identify specific issues, we can use the understanding of earnings quality to avoid relying on essentially random earnings numbers as a source of value.  For TNE an historical profit range of $25 – $66m tells us probably not to put too much store in a future guidance range of $71.6 to 76.3m.

What system is that?